I attended the London bike Critical Mass this evening, quite a turnout!

I turned up on the Colnago Rabobank Lux Dream CX

(try saying that after a few Red Stripe beers!)

The event is every last Friday of the month, and starts at the South Bank by the National Theater, on the saarf side of the River Thames.. 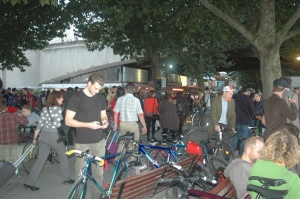 cyclists turned up from 18.30, some with sound systems, and set of around 19,30, across London’s Waterloo bridge… 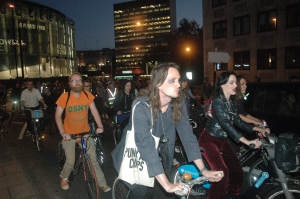 which, regrettably , is where I suffered a battery fail following this shot… 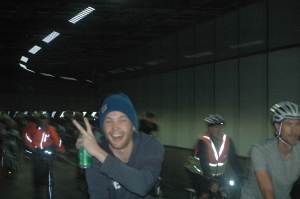 we cut across to Oxford Circus, did the length of Oxford street, down to the Notting Hill area, across to Kensington, then Knightsbridge, finishing up outside Buckingham Palace.

Here’s a link to Mass

Who are we? What are our aims?

We are not sure, opinions seem to differ. There are probably as many aims of CM as there are participants. Each person comes there with his or her own idea of what it’s about, and the sum of this makes up the Mass. We have no organisers and no planned routes and this website does not try to be representative of CM in any way.

Critical Mass achieved its international name following the first ever ride in San Francisco back in 1992, where it was christened ‘Commute Clot’. It was then “noted that, in China both motorists and bicyclists had an understood method of negotiating intersections without signals. Traffic would “bunch up” at these intersections until the back log reached a “critical mass” at which point that mass would move through the intersection”. Film ‘Return of the Scorcher’ also features the scene which led to the adoption of the name “Critical Mass” for the rides which now occur around the world.

The London monthly rides started in April 1994. 1995-96 reports. Videos from the 90s. It isn’t just for cyclists, sometimes there are wheelchairers, skateboarders, roller bladers, roller skaters and other self-propelled people. Cycle sound systems often play music on the ride.”