Just got this last night,

here is a ‘preliminary sketch’

I’m in some vintage events this year for the long haul, and hopefully this bike will see me through.

I was using ’82 Campagnolo Nuovo Record, and Ambrosio Elite Clinchers.

The stem is 3TTT, with Ernesto’s  panto graphed signature .

I’m still playing around with the build,

the spokes nipples on the rims have a little surface rust, so I want to get rid of that before completion.

I found this cheeky little stem, with Mr Colnago’s signature on it!

I still have more tweaking to do, and have to add this

I put cleats on for training,

You can see the profiling on the top tube,

and down tube,with milled and drilled gear levers.

The rear derailleur is ‘circa 72- a decade to early for the frameset,

The levers have scratches, which I will exchange for some pristine ones,

but I don’t think these hoods would be strong enough to withstand a transplant,

the gum is starting to crack and perish.

The freewheel will be a Maillard.

A purest would use Regina Oro, but they are ridiculously expensive , and awkward/difficult to extract from a hub.

I’ve been out on it, but as the cables are new and outstretched, the drive-side rd shifter is over extending, so I’ll use the down time as an excuse to change things.

I’ve had a change of heart, and  front and rear derailleurs and brake levers are  Campagnolo Super Record, circa ’82.

I was originally going to use it with the “tricolor’ Super Record group I am installing on the Super ‘Saronni’, but was

quite severely scratched and marked.

I picked one up for the super in better condition, so I’m renovating this one for the Mexico.

I started buy soaking the post in oven cleaning foam, and leaving if for about 5-7 minutes.

After washing the residue off, I rubbed down with a fine wet and dry pad with paper.

I have a set  of Campagnolo Omega tubulars with SR hubs from a donor bike that I will train on the flat and smooth with.

I changed the crank and chain ring

I will add the rest of the Campagnolo super record components,

I rode with a Maillard 13/26 freewheel, which felt OK, but I fell on a corner, and

on inspection later, the freewheel was compromised.

I’m putting a Shimano 6 speed 14/28 freewheel on, as 28 is the maximum  Campagnolo Super record is

meant to be able to work with , before having to extend/adapt the derailleur cage. 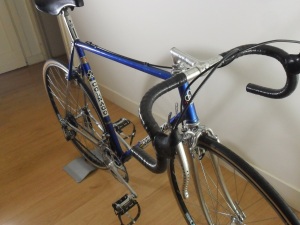 I picked up a wheelset in a thritf store the other day,Mavic G40 rims on Record hubs, with an odd front Mavic Motherly rim and Record hub front wheel.. 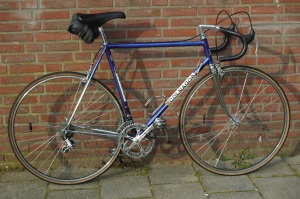 and got a scrap piece of leather to wrap a spare inner tube, levers, air and pump under the saddle..